What are the symptoms of iron deficiency? 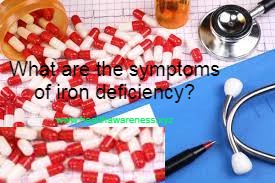 8. Palpitations or heaviness in the chest.

11. Restless leg syndrome i.e. tingling sensation in legs/hands, chewing in legs, dull pain in legs may be felt. Apart from this, due to lack of iron, there may be something stuck in the throat, bent nails, difficulty in swallowing food, addiction to non-food, etc.

Why is there a shortage?

If there is iron deficiency, its causes must be known. For example iron deficiency in the diet, especially in vegetarians. Additional supplements may be needed when the body's iron needs increase, such as during pregnancy or breastfeeding. Inflammatory diseases of the digestive tract such as celiac disease, inflammatory bowel disease or IBD, long-term gastric medications, after gastric surgery, long-term bleeding from the gastrointestinal tract (such as hemorrhoids or piles), worm infections, long-term pain medication, and blood thinners can also cause iron deficiency. shortage

We can easily prevent iron deficiency. Foods containing iron such as liver, fish, poultry meat, green vegetables especially spinach, pumpkin seeds, broccoli, dry fruits (such as raisins), apricots, almonds, pomegranates, bananas, apples, etc. should be kept in the daily diet. Vitamin C is essential for iron absorption in the human body. Therefore, along with iron-containing foods, vitamin C-containing foods should also be kept in the diet. Iron needs are higher than normal during growing age, so iron-rich foods should be kept more during growing age.

Regular deworming should be done 1/2 times a year. Personal hygiene (such as washing hands thoroughly with soap after using the bathroom, not walking barefoot, etc.) should be followed to prevent worms. Long-term gastric medication should be avoided. Gastric drugs and iron supplements should not be taken together. A break of at least 1 to 2 hours should be kept. To avoid piles of diseases, eat more water and vegetables so as not to get constipated. However, it is important to see a doctor to diagnose iron deficiency and get treatment accordingly.

If there is a deficiency of iron in the body, not only iron-rich foods should be eaten, but iron supplements should be taken. Iron supplements can be given in two ways. One. Through iron tablets or capsules. Two. Intravenous iron injection.

Usually, iron deficiency can be remedied by oral medication. But iron deficiency should be treated intravenously if any of these causes are present—inflammation of the stomach by iron drugs, diseases of iron digestion, bleeding from the body, and above all if normal life is disturbed by severe iron deficiency in the body.

There is no indication for blood transfusion in iron deficiency except anemia. Rather, it is harmful to the body. Find out the exact cause of the iron deficiency and take medicine as per the doctor's advice.

Schizophrenia: Causes, Symptoms, Diagnosis and Treatment Schizophrenia is an incurable disease of the brain. It changes how a person think...

What to do to relieve back pain

What to do to relieve back pain Back pain is one of the most chronic diseases. The disease is not limited to the elderly. On the contrary, t...

Palm oil bad for you

Palm oil bad for you: Palm oil Palm oil is a type of edible vegetable oil, found in the middle part of the palm fruit. Due to the high beta-...

What is Prurigo ? The term prurigo refers to acute itchy spots. It can be used when the cause is known (see list below) or to describe the c...